It’s been a while since Barack Obama answered users’ questions on Reddit, but here are some late thoughts on this anyway. I will present a short paper on this topic at the interdisciplinary symposium “Watching Politics“, University of Warwick, 31st of May 2013.

When Barack Obama announced his participation in Reddit’s Ask-Me-Anything subsection on 29th of August 2012, the message circulated rapidly among various social media. Only three hours before answering users’ questions on Reddit, he informed via Twitter: “Hey, everyone: I’ll be taking your questions online today. Ask yours here”. This status update was also meant to serve as a verification of the president’s identity on Reddit. Additionally, a picture of Obama sitting in front of his laptop was provided (see Figure 1). By the time he was online, the website experienced record-breaking user traffic and the server was temporarily overloaded (see Figure 2). The thread received 5,598,171 page views which is more than double than the second most accessed thread on Reddit in 2012.

The questions stated by Redditors ranged from “What’s the recipe for the White House  ’s beer?” to “What are you going to do to end the corrupting influence of money (…)?”. The questions raised by users and particularly Obama’s choice of questions to answer indicate a communication strategy that was aimed at appealing to the most common interests among Redditors.

Obama presented himself as a ‘geek among (proud) geeks’: The choice of questions which he answered were appropriated for giving the president a maximum chance of being identified with common interests, norms and values which Reddit represents. While comforting an almost stereotypical example of the ‘graduate without future’ (“I understand how tough it is out there for recent grads. You’re right – your long term prospects are great, but that doesn’t help in the short term”), he assured his endorsement of Internet freedom (“Internet freedom is something I know you all care passionately about; I do too”) and his support for the U.S. space program (“Making sure we stay at the forefront of space exploration is a big priority for my administration.”). 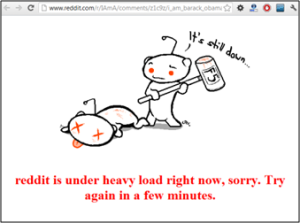 These issues and topics obviously appeal to many Redditors and overlap with popular topics as represented by subbreddits. They seem to have been considered to be of strategic relevance for the assumed target group. The selection of questions appears to be based on careful study of subreddits and users’ prevalent normative assessments of issues. Inquiries were preselected in order to have a positive influence on Obama’s electoral campaign. In this sense, the AMA represents an example of discursive politics, tailor-made for a specific media platform. How effective this approach was, is indicated in users’ euphoric reaction to Obama’s understanding of a visual (meme) culture which defines itself through insider knowledge. 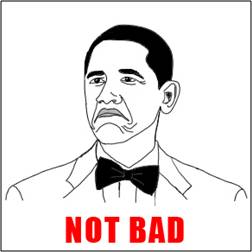 Obama’s concluding statement “By the way, if you want to know what I think about this whole reddit experience ‒ NOT BAD!” references an internet meme (see Figure 3) and indicates a strategic effort to present himself as an internet-insider. In this sense, political appeal is not only generated through topical content, but by signaling affiliation to an online (sub)culture.

This site uses Akismet to reduce spam. Learn how your comment data is processed.