When Google Inc. and the US Centers for Disease Control and Prevention first published information on ‘Google Flu’ in 2008, we were getting a foretaste of the knowledge and power incorporated in web search logs. In a nutshell, the project is based on a correlation between users’ flu related queries and the intensity of flu activity in particular regions. Google Flu Trends enables the aggregation of “Google search data to estimate current flu activity around the world in near real-time”. The notion of real-time predictions is highly significant in this context, since it differentiates this big data approach from conventional quantitative methods. A recent paper by the economists Tobias Preis, Helen Susannah Moat and Eugene Stanley takes the possibilities of analyses based on Google search data even further: Instead of relating health issues to users’ Google search requests, they presented a potentially profitable correlation between search terms such as “debt” and stock market developments. The data used for their research was provided by Google’s public Trends service.

As the authors point out in their paper, analysing fluctuations in Google query volumes for ‘finance search terms’ allow to “(…) find patterns that may be interpreted as ‘early warning signs’ of stock market moves”. Their study refers to daily price fluctuations in the Dow Jones Industrial Average (DJIA), consisting in 30 stocks. While earlier investigations by the same authors were rather sceptical towards such correlations, in this instance they were able to demonstrate the profitability of an investment strategy based on Google Trends data. In an experimental, hypothetical investment strategy, the authors based their buy and sell decisions on de- and increases of specific ‘semantic search volumes’. For example, a Google Trends Strategy using the key word “debt” would have generated a profit of 326 percent: its success confirms the assumption that increases in the price of the Dow Jones Industrial Average follow on a decreasing search volume for particular finance terms. Likewise, a growing search volume for certain financially related terms indicates an imminent drop in the price of the DJIA. Therefore the Google Trends Strategy was based on two decision criterions for trading: In simplified terms, a decrease in search volume led to buying and an increase in search volume resulted in selling.

Other key words ‒ 98 in total ‒ have been used to guide a trading strategy (see figure). While “inflation”, “housing” or “bonds” showed a high correlation to stock market movements and hence have proven useful/profitable, terms such as “freedom”, “home” or “labor” do not indicate any predictive potential. In this sense, the authors have started to decrypt a semantic net of stock market fluctuations. 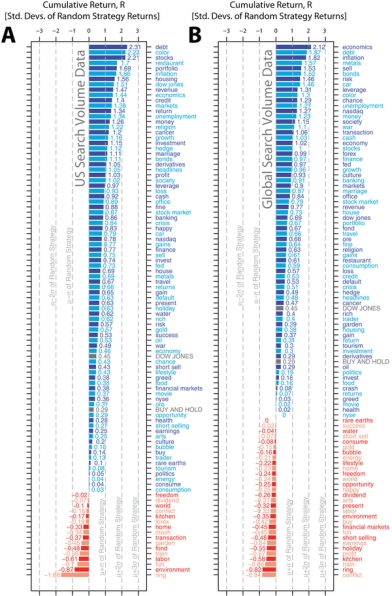 However, now the question arises of whether the publication influences the future validity of its own results: It is debatable, how susceptible such predictive strategies are to strategic efforts of influencing the respective Google search data. Seeing how companies have long-since discovered strategies such as search engine optimization, the investigation, development and implementation of semantic search strategies in favour of respective brands’/companies’ market value does not come as a surprise. The scale which would be necessary in order to cause such an impact in Google search queries could be a preliminary, technical challenge ‒ or rather, it acts as starting point of a new/growing market for appropriate Software solutions or digital mass workforce through platforms such as Mechanical Turk.

This site uses Akismet to reduce spam. Learn how your comment data is processed.